The Wayside Valley herd, located in the Mackinaw Rivery Valley adjacent to Interstate 74, between Congerville and Goodfield, IL, is home to 30 black or dun Belted Galloways.

Belted Galloway cattle are an ancient, heritage breed founded in the coastal regions of Scotland, first mentioned during the 16th Century. Their heritage has conditioned them to survive in very harsh climates, and U.S. breeders have discovered that the thrifty, medium-sized cattle are excellent foragers.

Fogle Farms, owned by David’s parent, Cecil and Jill Fogle of Congerville, IL; purchased the farm in 1974. Through the years, conservation improvements have been made by adding terraces and drainage systems to improve profitability of the tillable land. Ponds were added to reduce soil erosion and catch field run-off. Today the farm raises corn, soybeans, hay, and Belted Galloway cattle.

David and Leanne, along with their cattle, moved to the Congerville farm in 1986. They began building fence over portions of the farm that had zero profitability. In 1997, Belted Galloway cattle were purchased and they found that Belties were not only excellent grazers, but cleaned out the underbrush and flora of the farm’s timber. During winter months, the herd grazes on turnips and rye which is aerial seeded into the corn rows during the month of August. The crop residue, including the turnips and rye, extend the grazing season. The cattle are also fed grass hay throughout the winter months.

Leanne’s parents, Larry and Sarah Musselman, retired after operating a dairy farm for almost 50 years. They often watch cows during calving season and Larry helps make hay. They own a small herd of Belted Galloway cattle too.

We have spent the past decade improving the herd through careful selection of herd sires that enhance structure and muscling. We have enjoyed successful show seasons and have made many sales of our breeding stock throughout the United States. We always welcome visitors and talking about Belted Galloway cattle! 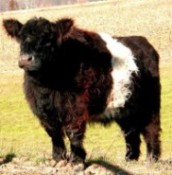 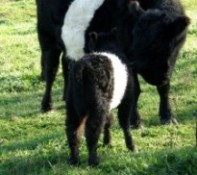