At Wayside Valley, our top females are a combination of three herd sires that we have used over the past decade. The bulls have never been shown and the only photos available are candid, pasture shots.

ISF Champion 15708D was our first purchase in 1997. Deep bodied and heavily muscled bull he added invaluable females to the herd. 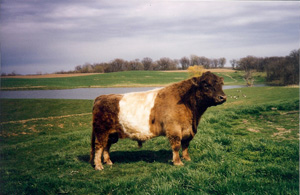 Belted Galloway Society Inc., Platinum Lifetime Award Winner, Thistle Creek Jack Straw 7323B joined the herd in 2002 .  He is traditionally styled with great conformation. He is a heavy structured, sound bull that is square at the ground. Many heifers have been produced by Jack and sold throughout the years. They exhibit a unique combination of structure, body and look.

Belted Galloway Society Inc., Gold Lifetime Award Winner, East View Elmo 5251, was purchased in late 1998. He was a gentle giant, who was an easy fleshing, thick made bull, whose female progeny are feminine featured and big bodied. 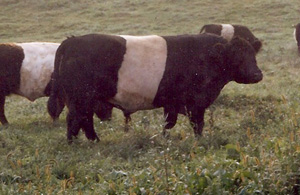 Power and performance, with balance and functionality, are what makes MCF Supreme 415W a valuable resource to Wayside Valley’s breeding program. His first calf crop took us by surprise. Game On! 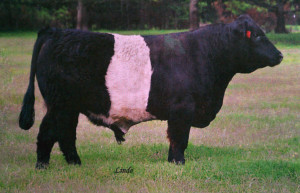 The Belted Galloway Society Inc., through a point system, recognizes animals that have produced progeny that have been shown throughout the United States. Below are the Wayside Valley animals that have achieved Platinum, Gold and Silver Lifetime Awards.